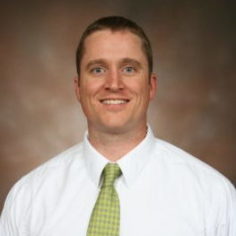 Chris Clark, a native of Martinsville, VA, attended Radford University where he earned a bachelor of science with concentrations in chemistry and biology, competed on the golf team, and was an active member of the American Chemical Society and the Pi Mu Epsilon math fraternity.

Before attending pharmacy school, Chris returned to his high school alma mater, Carlisle School, where he taught chemistry and physics, as well as coached the basketball, golf, and knowledge bowl teams.

Chis received his Doctor of Pharmacy from Appalachian College of Pharmacy, where he served as the APhA Vice President of Policy and was a member of both Kappa Psi and Phi Lambda Sigma professional/leadership fraternities.

Chris’ professional interests include the advancement of pharmacist-led chronic-disease state management – particularly in diabetes, hypertension, and dyslipidemia – in the community pharmacy setting. As a current resident of ACP’s PGY-1 Community Residency Program, his primary areas of focus will be in the expansion of existing medication therapy management and immunization programs at his practice site, as well as the development of a wellness program on the campus of ACP.

In his spare time, Chris enjoys spending time with his wife, Risa, and their two dogs, playing golf, weightlifting, and watching college basketball and football. Chris and his wife, who are eagerly awaiting their first child in September of 2017, are active members of Gracewood Church in Lebanon, VA.