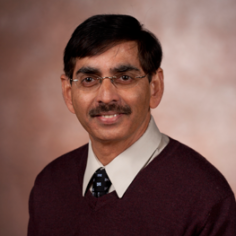 Dr. U.S. Rao, Professor of Pharmacology, earned his Ph.D. in Biochemistry from the Department of Biochemistry, Indian Institute of Science, India, in 1987 under the supervision of Dr. S. K. Murthy, for his work on polysaccharide enzymology.

Dr. Rao did his postdoctoral study on the molecular mechanisms of H+-translocating ATPase (commonly known as proton pump), a member of P-type ATPases that include important H+/K+- (proton pump of gastric mucosa), Na+/K+-ATPases, in the department of Pharmacology, the University of North Carolina at Chapel Hill from 1987 to 1992. Importantly, these ion-translocating ATPases are dysregulated in many human pathological states and are the targets for pharmacological intervention. Dr. Rao’s contributions to the understanding of the mechanisms of H+-ATPase can be accessed from Pubmed.

Subsequent to postdoctoral training, Dr. Rao began developing an independent research program on understanding the molecular mechanisms of multidrug resistance (MDR) in cancer. Dr. Rao’s research focus has been on P-glycoprotein (Pgp) (also known as MDR1 protein, ABCB1), an active drug transporter belonging to a large family of ABC transporter proteins that include breast cancer resistance protein (BCRP, ABCG1), and multidrug resistance proteins (MRPs). Pgp and other members of this family play a key role in keeping drugs out from entering brain and other tissues, as well as extruding cytotoxic metabolic byproducts from accumulation in body tissues. Ironically, some cancers express, and/or begin to express, Pgp during/after chemotherapy. Pgp expression imparts cancers with an ability to escape from the killing action of anticancer drugs. Pgp accomplishes this function by actively extruding the anticancer drugs from cancer cells, leading to MDR. Pgp and other drug transporters are the most favorite targets for drug development in pharmaceutical industry, and a thorough knowledge on these transporters is an essential requirement for Pharm.D. education. For the last 20 years, Dr. Rao’s research focus has been on the mechanisms of Pgp-mediated drug efflux. His current research is focused on identifying phytochemicals that could kill MDR cancer cells without affecting the function of drug efflux pumps.

Sodium ion transport is defective in several human disease conditions that include cystic fibrosis (CF), hypertension, Liddle’s syndrome and others. Molecular analysis has revealed that the amiloride-sensitive epithelial sodium channel (ENaC), is dysregulated in these disease states, leading to abnormal Na+ reabsorption across body epithelia. Dr. Rao characterized the molecular mechanisms of ENaC using planar lipid bilayer procedure. In collaboration with other investigators, Dr. Rao’s research group characterized the functional role of gamma-subnit in ENaC function and the functional role of ENaC in renal sodium reabsorption. Publications related to ENaC from Dr. Rao’s laboratory can be found at Pubmed.

Presently, Dr. Rao’s research is focused on identifying mechanisms by which the inflammatory bowel diseases (IBD) (ulcerative colitis and Crohn’s disease) predispose and promote tumor development in the colon. A theoretical analysis of the data from the genome-wide association studies and expression microarray database available at NCBI, Dr. Rao’s laboratory identified galectin-4 as playing a key role in inflammation and cancer of colon. His current efforts are focused on establishing the therapeutic potential of galectin-4 in controlling colorectal cancer and inflammation. Publications related to galectins from Dr. Rao’s laboratory can be accessed from Pubmed.

Dr. Rao has been involved in teaching Pharm.D., medical, and graduate students at Texas Tech University Health Sciences and the University of Nebraska Medical Center for the last 14 years. His teaching interests are biochemistry, oncology and pharmacotherapy. He was responsible for designing in many courses at these higher educational institutions. He received certified admiration for his teaching.

Dr. Rao enjoys gardening, listening (and humming too) to the Indian classical music, reading and workouts. Dr. Rao has two daughters, Aruna (a pediatric dentist) and Asha (a medical school student), who live elsewhere in the country. Dr. Rao lives in Grundy, VA, with his wife, Prema. They enjoy the company of Simba and Tyra Banks (feline members of the family), who enrich their lives!